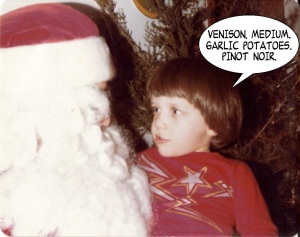 Merry Christmas! It’s currently 75° and a little cloudy, which is to say it feels nothing like Christmas at all. Last year I saw snow, though I had to drive a thousand miles to do so. This year, nada. Oh well. The good news is that there’s been less “gifting” this year, so the family is making some progress on that front.

Sunday night was the annual high-school mini-reunion. It went a little more smoothly this year than usual due to more widespread use of Facebook (easier planning) and going to Golden Corral instead of Buca de Beppo (less expensive). It was good to catch up with folks I normally only see at Christmas, and a few people I haven’t seen since the ten-year reunion, if not longer.

The Planner of the Mini-Reunion told an amusing story. This winter, she and a bunch of friends had occasion to have their pictures taken with Santa. One friend, a lesbian, sat on Santa’s lap…

I replied, “The man is a Catholic saint. What did you expect?”

I probably should have just shut up.

The next night was Chicago’s ridiculous, must-win comeback victory against Green Bay. Great ending. The Bears block a short field goal attempt as time runs out, forcing overtime. At the coin flip, Green Bay calls “tails,” the ref flips the coin, which bounces off Brian Urlacher’s helmet and then lands “heads.” Bears receive the kickoff, zip down the field, kick the field goal to win the game and stay in the playoff race. Now the Bears “just” need to beat Houston and need either (A) Minnesota to lose to the Giants, or (B) both Dallas and Tampa Bay to lose. It won’t be easy, and it’ll be a disappointment if they fall short, but at least they spoiled Green Bay’s chance to spoil the Bears’ playoff hopes.

The day before the night before Christmas, I found a few leftover Christmas cards at Dad’s house. Feeling a momentary twinge of what I suppose “guilt” feels like due to not getting gifts for anybody, and deciding that a card is a little bit like a gift, I figured I’d mail them to a few buddies I hadn’t seen in a while. Besides, they were free and probably would’ve cluttered the house anyways.

The cards featured Santa and the reindeer relaxing in deck chairs on a cruise ship, being served drinks by a penguin—which is total nonsense because penguins don’t live at the North Pole in real life. The inscription read, “What a wonderful season, what a wonderful reason to send holiday greetings to you.” I wrote “Christmas” in black magic marker over the word “holiday.” It occurred to me that that might offend a particular friend who is a devout evangelical atheist. The thought of her outrage tickled me.

Last night we had Christmas Eve dinner at my aunt’s house. She made lasagna rolls like Gram used to. While everyone else had one or two servings before moving on to cookies, I went back for fourths and fifths of the lasagna. I can get cookies any old time.

There was some discussion about whether my aunt’s lasagna and crescent cookies were as good as my grandmother’s were. The consensus was that no, they weren’t, how could they be? This was Gram’s cooking we were talking about.

1. The human diet is worse now than it has ever been in history, and we are doomed to a future of burnt, cold, overcooked, undercooked, overcooked, dry, soggy, tasteless crap that has too much salt and that moms didn’t even make enough of.

2. Eve was the greatest cook ever.

Off to my Jewish mother’s home for the traditional Christmas dinner of pizza and shrimp. L’chaim.