Whilst MQ and I were vacationing down in St. Petersburg, my brother notified me via electronic telecommunication that Portillo’s opened a restaurant in the area just last week. This was exhilarating news, and plans were made for a pilgrimage to Brandon.

We arrived around two o’clock yesterday afternoon, and I was thrilled that the place looked like the genuine article and not some tepid facsimile a thousand miles in distance and spirit from the real thing up north. At least five people in white official Portillo’s button-downs and bowties were walking up and down two drive-through lanes taking orders.

The parking lot and the vacant lot across the street were packed. The pictures below don’t do the crowdedness justice. 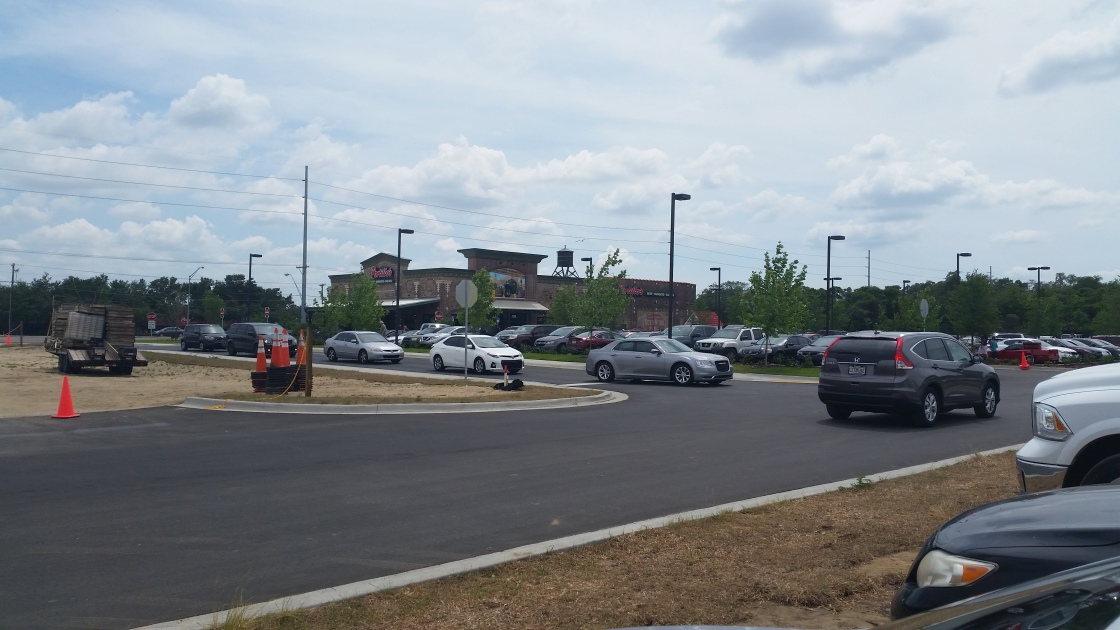 Upon entering, we were corralled into more of an ordered blob of people than a line. There were at least 30 people in front of us in the blob. The place looked like you’d expect a Portillo’s to look, assuming you’ve ever been to one, and featured a 1920s/30s Prohibition theme like the one in Downers Grove. I should’ve taken more pictures; I’d blend right in with the transplants taking pictures and talking to family back home about how it really was a real Portillo’s, or how it was bigger than the one in this suburb or that suburb, or how they’d never seen a crowd like this one.

We eventually placed our order with the gentleman in the white shirt and black cap: Italian beef sweet with fries and a Coke for me, Italian beef-cheddar croissant and a water for MQ. She grabbed two seats at a bar, and I stood in another large blob of people for maybe ten minutes waiting for our order to be called out. There was some bumping here and there and an occasional step on a foot, but we all knew why we were there, and each forgave the other.

The food-monger finally called out our order (“Three seventy-two,” I’ll never forget it) and I stepped forward to claim it. Grabbed the tray– white Portillo’s bag stuffed with manna, our drinks nestled in the recessed cupholders– grabbed some ketchup and napkins, and navigated through the crowd and tables to our seats.

I was a viking in Valhalla, guzzling mead and feasting on Saehrimnir with my valkyrie.

(I hadn’t actually killed anyone that day, or been killed myself, and it was a soft drink instead of booze, and the meat was beef instead of pork, and MQ doesn’t like big hats, but you get the idea. It was an authentic Portillo’s experience, minus the snow and the governor being hauled off to jail.)

I apologize for the quality of the pictures. Here’s her beef-cheddar croissant, which we didn’t realize at first was a croissant because it was so big and awesome that they folded it over like a sub roll instead of slicing it open like a hamburger bun:

Here’s my Italian beef with sweet peppers and standard-issue gravy:

Here are the fries:

And here are a commemorative paper bag, menu, and napkin:

We’ll have to make another trip down there for Chicago-style hot dogs and their chocolate cake, which is the best fast-food chocolate cake on the planet.

It was all so beautiful and it was glorious to have a surprise reunion with my favorite restaurant and to share the moment with MQ and I probably cried a little but that was OK because it was all so beautiful. I thank my brother for the timely information, and MQ for her forbearance and adventurousness. May even more Portillo’s restaurants soon grace the Sunshine State, and may God bless Dick Portillo.

We also went to the Dali Museum and Tarpon Springs.