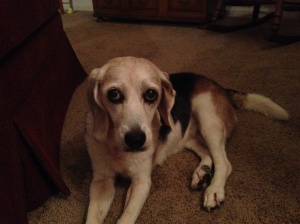 Roxie was, for all intents and purposes, a rescue. Her first owner was probably abusive. The first few years after Mom got her, Roxie would cower at anyone’s approach, and wince at the slightest touch. She was pathos-turned-canine, and didn’t seem to know much about being a dog.

Happily, Mike the Dog took it upon himself to train Roxie. Mike would sit or run or play, and Roxie would watch and then follow his lead. She became more active, and she stopped ducking away from the human hands that tried to pet her, and she would approach people more willingly, and she became a happy dog.

Watching it all happen was uplifting. Would that more humans could turn their lives and spirits around in such a way.