I spent last weekend in Clemson with some dear friends from college. Here is the indisputable visual evidence. You may click to embiggen the pictures.

Behind the new student center (“new” in that they built it after I left many years ago) are brick walkways etched with the names of the Classes of 1996 and 1997. Dr. Hmnahmna was kind enough to send me a shot of my brick a few years ago, but now I have my own:

Note that if you ignore my first initial, the bottom two rows read “MR VINCENT D VISCARIELLO.” So I have two-thirds of a brick while everyone else is stuck with a single line. I also got shots of some friends’ bricks from the Classes of 1996 and 1997, so if you’d like I can e-mail them to you for a small shipping fee.

Aabrock-sans-Nikita and I walked around campus a bit. Here’s a so-so shot of the first five holes of the Clemson frisbee golf course, aka the Reflection Pond, from the walkway above the fifth hole. 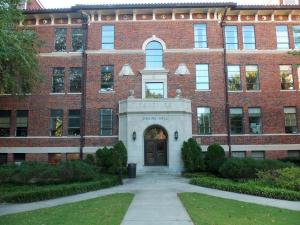 Here’s Cope Hall, where I met my dear friends Mole (first conversation: “Excuse you.”), DFJ3 (“Which room is the shaggy haired guy in?”, a reference to Mole), Dr. Hmnahmna (“Are you a grad student or something?”), Scott (I don’t remember our first conversation, but I remember my first conversation with his girlfriend, which I won’t repeat here), Major Patton (Me: “Is Simon [the RA] in?” Him: “I’m sorry, I’ve retired for the evening.”), Robert (probably something bizarre and rambling that formatted my brain), Aabrock (probably something football related due to time spent in the lounge), and Brundgren (he talks so rarely I think we haven’t actually completed our original discussion). Apologies to those I omitted; it is sheer forgetfulness. I was on the top floor, third from the left. Used to have a bunch of sodas duct-taped together, hanging out the window in winter. 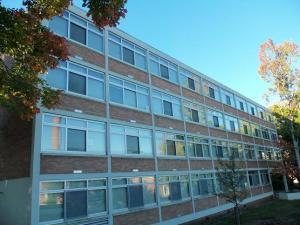 My dorm was right next to Fort Hill, one-time home of none other than rabble-rouser-in-chief John C. Calhoun. The story was that if you entered the mansion, you’d never get your degree. I toured the place two hours before graduation.

Then off to downtown. The Astro was still closed, the Newsstand hadn’t miraculously come back, this dinky little restaurant had still misappropriated the proposed name of my buddies’ coffee shop, “356.” The bastards even stole the font. Look carefully at the picture and eventually you’ll see the biggest problem.

Thank God Nick’s was the same, and open, and serving French dip sandwiches and Woodchuck for breakfast:

I only got three decent shots in the stadium. Here’s the east end zone, with members of the 1981 championship team walking onto the field: 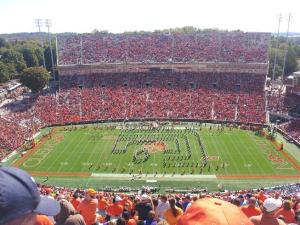 It’s upside down from my perspective, so either flip your laptop or yourself over and the nickname for this particular logo will make more sense.

It occurs to me that the evidence is at least partly disputable because I didn’t post any pictures of my pals. I’ll photoshop them in later.

← Someone didn’t learn.
On monopolies, part one. →