Day Two of the Virginia leg: I drove to the Mole’s house and helped him take down two small trees in his front yard in preparation for his wedding reception in September. Actually, I didn’t do that much aside from watch and get hit by a branch as the second tree came down. I helped out a bit more with dragging the felled tree to the curb, cutting the stumps down as much as possible, and raking up the mulch and woodchips.

Later that day, Dr. Hmnahmna and I went to the Prince Michel vineyard to try a few wines. I tried seven or eight and ate a whole bunch of oyster-shaped crackers. The waiter gave a florid description of each wine, talking about oak and strawberries and stone and potpourri and God-knows-what-else. I smiled politely, nodded, and tried to look like I was thinking really, really hard about what flavor registered on each taste bud. Then I bought bottles of the three I thought tasted best: I bought a semi-dry reisling, a dry rosé, and a viognier. (Oenophiles need not share their thoughts or recommendations with me.)

The next morning, we went to the Luray Caverns in northern Virginia. I haven’t been in that many caves, so I don’t have much to compare it to, but this cave impressed me enough that for two hours I was that tourist who needs a picture of everything. I took almost 150 pictures and nearly wiped out my phone’s battery. Since my phone’s camera has no flash, the photos didn’t all turn out that well, but here are some of the highlights:

There was a very shallow pool early in the tour, and I swear that if you weren’t looking almost straight down into the water, you couldn’t tell that it was a reflection. I think they said that it was only a foot-and-a-half deep at its deepest point.

These stalactites looked like drapes. Instead of tapering to a point over the course of bazillions of years, they looked like sheets in the wind. The second picture was shot from below. 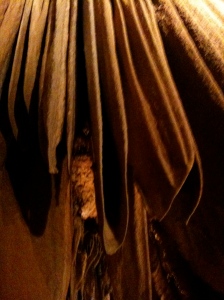 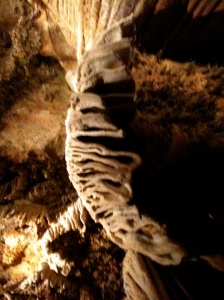 At times it felt like we were walking through a Giger sketchbook, minus the eyeballs.

This is the Stalacpipe Organ, which taps stalactites with rubber mallets to make music. It sits in a large, open area that often hosts weddings. I recommended that Mole and Moladette have their wedding down there, they passed. 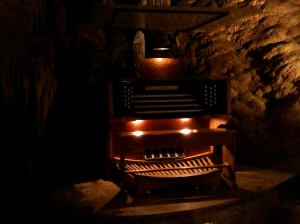 Near the end of the tour was a wishing pool of sorts. Over the years, they’ve collected over $700,000 from the water and donated it to various charities. The greenish tint of the water was due to the copper coating from the coins.

Unfortunately, my penny hit a rock before bouncing into the water, thus negating my wish for world peace and eternal happiness for all. Sorry about that.

These are the famous “fried eggs” near the end of the tour. If I remember correctly, they were the last items in the cave that people were allowed to touch, but 20 or 30 years ago even these were put off limits (human skin oils interfere with the natural development of the rocks). Oh well.

Unfortunately, I did not capture images of what, to me, were the two most memorable images of the foray into the caverns. First was a large stalactite that had fallen so long ago that a stalagmite (the ones that grow upwards) had started to grow over it. I took a picture, but it’s too dark to make anything out.

The second was watching First Lady Michelle Obama enter the caverns with her daughters and 15 or 20 of her closest friends in the Secret Service. I was too awestruck to even think of getting my camera phone out. She, as are many people in this age of high-defintion, is far prettier in person.

Near the entrance to the caverns was a hedge maze, like the one in The Shining but without the snow and crazy failed writers chasing you with an axe. Mole’s 8-year-old niece and 10-year-old nephew challenged Mole and me to a race to get through the maze. To win, you had to find your way to each of four stations, get your ticket stamped to prove you’d been there, and find the exit. Despite the blazing sun, the light sunshower, the dizziness, the confusion, and the taunting phone calls from the niece and nephew, Mole and I emerged victorious.

After walking through a small antique carriage-and-car museum (which housed Rudolph Valentino’s 1925 Rolls-Royce Silver Ghost, painted to resemble “alligatored” leather), we headed back to Mole’s house for dinner. For appetizers, Mole threw some hot dogs and hamburgers on the grill, and Moladette prepared her epic pasta salad. The main course in my book was Dr. Hmnahmna’s famous “Mama’s Whup-Ass Dip,” prepared for this occasion by Mrs. Hmnahmna. Yes, I know I said chips-and-dip were the entree, but it’s pretty filling and pretty damn tasty dip. I’ll let Dr. Hmnahmna post the recipe in the comment section if he so desires.

I have to say that the real highlight of my whole vacation was meeting Mole and Moladette’s son. I have several first-cousins-once-removed, but I feel like this baby is the closest thing I have to a nephew right now, because my brother and sister and their respective spouses are slackers in that department.

The most remarkable thing about the kid is how surprised he looks whenever he’s awake. His eyes nearly pop out of their sockets in utter amazement at everything he sees. But the more I think about it, the more I think that’s how all babies should look. After all, they’re seeing almost everything they look at for the first time ever. Everything should be a surprise to them.

Next time, my last two stops: Baltimore, Maryland and Columbia, South Cackalacky to dine with The Robert.