Today, for the first time ever, I attended a Chicago Bears game, thus fulfilling my eleventh resolution of the year. It was a bit disappointing; I had a Bubba Burger instead of a brat, a bottomless Pepsi instead of a beer, and the Bears fell 40 points short of the 78-point victory I predicted. I even neglected to have Malnati’s and Portillo’s shipped in for the occasion. Oh, well. Maybe next time.

The Bears better be careful… they’re nearing their annual quota for offense. Click to embiggen: 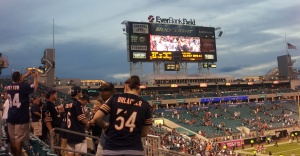 On the long walk in, while we were sitting in the seats, in the club area, on the long walk out, it seemed like all anyone was talking about was the insane number of Bears fans at the game. I assume many of them were snowbirds and transplants who normally root for the Jags, but showed their true colors today since the Bears were in town.

I was in the second deck, at the 44-yard line, on the Bears’ side. I sat next to a lady who wore teal. She saw my navy C-shirt and said, “You’re brave.” I pointed behind her: the next several rows back were full of navy. I said, “I’m safe.”

By game’s end it seemed like there were only three colors worn in the stadium: navy blue, burnt orange, and white. And I don’t mean Jaguars white, I mean Bears white. The Jags fans must’ve taken off really early. Here’s a photo I took of the home side of the stadium with two minutes left in the game (click to embiggen): 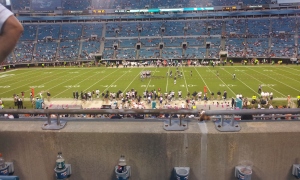 Maybe it’s just me, but the only teal left was on the empty seats.

I love that both Peanut and Briggs got pick-sixes in consecutive games. I love that the Bears’ defense outscored their opponents. Those are usually the best games (e.g., Bears-Cardinals 2006, the “crown their ass” game).

The Bears are beating the tar out of the teams they’re supposed to. The schedule gets a little bit tougher in the coming weeks; we’ll see how it goes.